This month we are happy to announce that planning has been approved for a new residential scheme in East Ham town centre on behalf of Kundra Holdings LLP. East Ham itself is a commercially vibrant area but has lost some of its original character due to the removal of original shop fronts. With this project we have been encouraged by our planners to create a balance between old and new, rectifying some of the building’s old charm.

The mixed-use space will consist of four one-bed flats, entailing the partial demolition, refurbishment and extension of this end of terrace property. Our proposal seeks to replace an existing two-bedroom maisonette and existing sub-divided ground floor commercial unit. 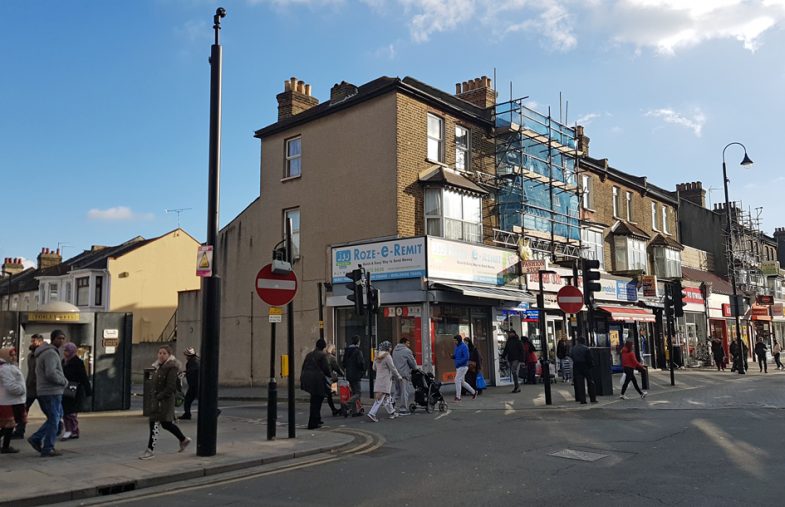 The housing mix proposed in this scheme has been made possible due to recent changes in the local policy regarding developments in town centres. The council have allowed a contemporary extension for this site, in turn allowing the original building to be preserved and restored. The Emerging London Plan Policy SD6 outlines “the particular suitability of town centres for smaller households… which should be considered and encouraged”. This same approach has been mirrored in policy H4 of Newham’s Core Strategy.

Therefore, this was a perfect opportunity to create this high-density, mixed-used scheme to provide high quality, contemporary, well-lit flats of the highest design standards in a busy and urbanised town centre. Despite the constraints of a narrow site, all new residential units created are dual aspect with excellent sunlight provision. In addition, three out of the four flats include private amenity space and two of the units’ maisonettes. The impact on the neighbours’ sunlight access has been carefully assessed and an analysis submitted with the application demonstrates the suitability of the proposed massing.

Proposed enhancements will remodel the front of the terrace. As East Ham is an area consisting largely of Victorian and Edwardian terraced houses; the new shopfront design will be evocative of the original Victorian property, while the roof slope will be altered to mirror the opposite terrace. Existing non-original windows will be replaced, and a small dormer extension will provide access to a roof terrace for the top floor flat. Other improvements include a dedicated commercial and residential refuse and recycling store along with cycle storage space.

For the rear extension; its height will match that of the existing eaves, and its massing will be stepped towards the rear with the new parapet aligning with the neighbouring terrace houses. Two vertically proportioned traditional sash windows shall be added to the existing flank wall, creating rhythm in the extension. A mansard of patinated zinc will extend downwards to subdivide the brick elements, serving to respect the existing context by modulating the scale of the building.

Overall, we are hopeful that this new addition to High Street North will provide a benchmark of quality in the area, stimulating a larger scale renaissance in the high street. Our renovations and transformations have been sensitively considered in line with the area’s history and culture. We have undone previous ‘improvements’ that were detrimental to the building’s original integrity. By restoring and introducing new elements inspired by traditional design, we have high hopes for the longevity of this building.